Turns out you can have a civil discussion on Twitter, if that discussion involves power ballads, Dee Snider, and More Than Words not being one. 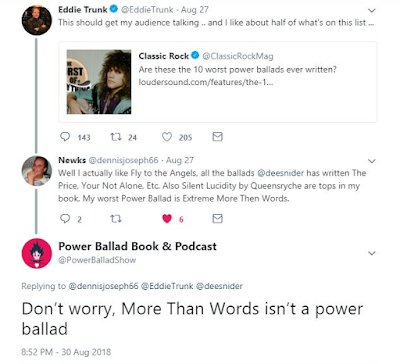 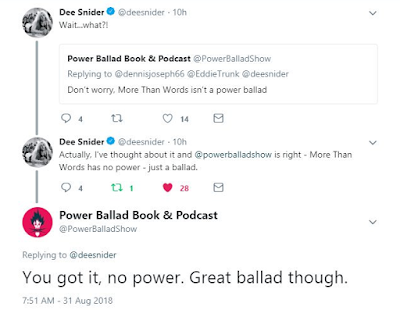 Over at Sports Illustrated, Andy Staples in his April 16th Punt, Pass and Pork column responded to a tweet ("Have you ever done 1988-1992 power ballads as a random ranking?") picking his top fifteen from this period.

At first glance, it's a very good list. Lots of favorites sprinkled with a few lesser-known but worthy selections (i.e. Alias and Vinnie Vincent Invasion - nice!).

It also includes the two most common power ballad related mistakes - including "More Than Words" by Extreme (it's just an acoustic ballad, there is no power) and "November Rain" by Guns N' Roses (it's too long, it changes from ballad to midtempo).

Another quibble is with the Bon Jovi selection. "Living In Sin" is a fine song, but it's not the best of this era, or even the best off this album. For me, that goes to "I'll Be There For You." I might even argue that "Bed of Roses" off the 1992 album Keep The Faith is a better choice. Here's Andy's full list:

I'd swap Cinderella into first position (because as mentioned previously, that's my choice for favorite power ballad of the era), add "House of Pain" by Faster Pussycat into #6, and then "Don't Close Your Eyes" by Kix at #13, but that's just me.
Posted by Tim Minneci No comments:

March Shredness 2018 starts tomorrow, and this year it is all about Hair Metal! Click the link to learn all about the tournament, and make sure to vote for your favorite power ballad!

To be honest, I'm not quite sure what this is. Autogenerated? Proof of concept? It's kind of weird.

For today only, the book is available for free digitally via Amazon Kindle. That's right, free!
Posted by Tim Minneci